I'm realizing that I can't eat high amounts of sugar in the evening if I want a good night's rest. Not only do i find myself tossing for much of the night, but during the time I actually am asleep I have some weird, unsettling dreams. While I don't remember most of them (although the weird feeling often persists throughout the morning) I did share one with Kenny immediately upon awakening. And he remembers it and keeps telling me to blog it for all to analyze. So here the super condensed version:
It's my dad's 50th birthday and I've pulled out all the stops throwing a huge bash. He's not really cooperating with much of what i've planned and he is even refusing to eat the decadent chocolate cake I baked for him myself. And so I spend the remainder of the party (of which the details are blurry) sneaking around and repeatedly ambushing my dad with a syringe full of the chocolate cake trying to inject it into his bloodstream. I never succeeded. And I woke up.
The same night of this dream I was woken by an asleep husband yanking on my arm. After pulling my arm free before he tore it from its socket, he then sat up, reached over and grabbed the comforter off of me and rolled himself up in it. Never waking up. Evidently he was having a rough night, too.
And now I must go. Kenny's at a meeting which gives me just enough time to whip up something sweet. I'm a glutton for punishment I guess. But as long as I don't share with Kenny then at least I don't have to worry about him dismembering me during the night.
Posted by Jill at 7:01 PM 3 comments:

This is the only photo I have from our holiday weekend. 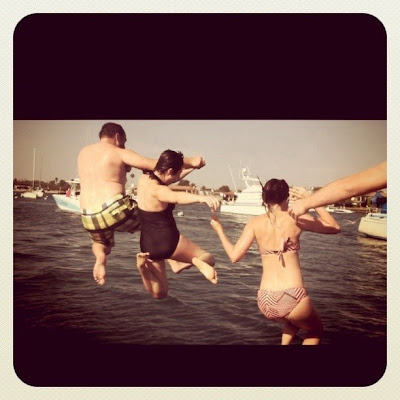 If this doesn't say it clearly enough, I'll spell it out: I was way too busy to take photos. Obviously.
photo stolen from Angie's Instagram
from left: Matt and Angie Sloan, me, and Jeff Thompson's arm
place: Newport Beach harbor. After that weekend I'm now positive that I need constant access to a private beach. With former NBA players as neighbors. It's pretty awesome. (Thanks again for hooking us up, Aunt Nora!)
Happy (belated) Birthday America!
Posted by Jill at 7:02 PM 1 comment: