So my cousin recently told of a rock climbing excursion she took for her birthday and then I found some great pictures of rock climbing...so rock climbing was on the brain this weekend. While we didn't make it on Saturday as planned (we got side tracked with some sushi and surround sound action at Skyler and Elise's instead) we did make it to Rock City in Anaheim Hills on Monday night with Nicole and Jeff Thompson (Kenny's sister and bro-in-law.) It was SOOOO fun...and quite the work out! My arms are still like noodles. I (as always) took way too many pictures, so enjoy!

Kenny at the top (great pose)- 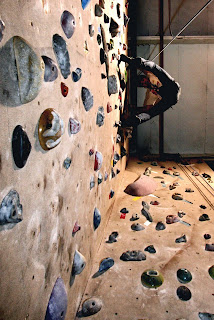 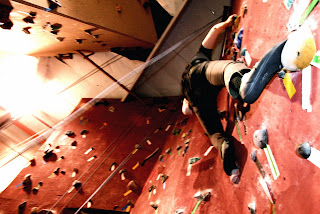 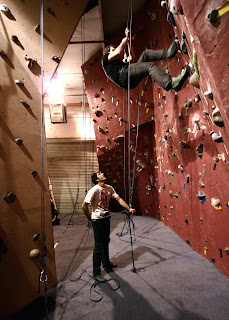 Kenny, the silhouette (stretch those legs!)- 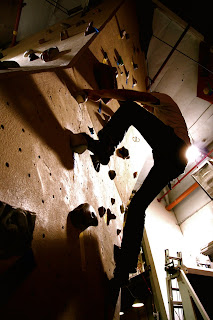 In addition to the climbing walls was this narrow tunnel that went inside one of the main structures. After crawling through in the pitch dark there was a pole going straight up to the ceiling and then more tunnels. It was (again) super narrow and dark the whole time. So fun! Nicole and I took awhile to get through it, but made it!

Here's Nicole (at the entrance) 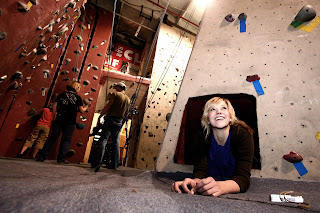 We're in that little hole way up at the top - 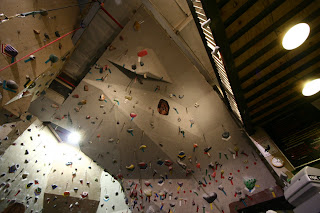 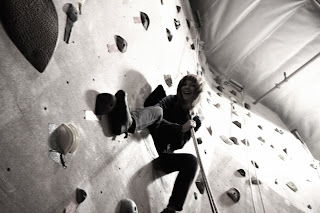 Yeah, we thought we were pretty tough. 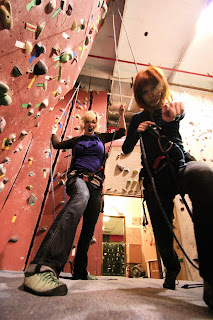 I did do some actual climbing - 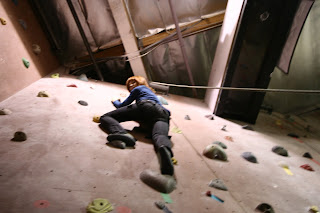 So did Nicole (Kenny and Jeff were really into it) 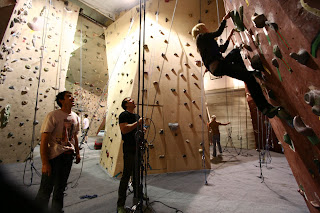 Even at the top of the wall, Nicole will pose for the camera... 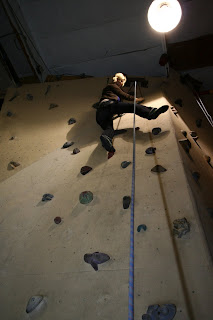 ...but she'll also get down and dirty to get a good picture of someone else. 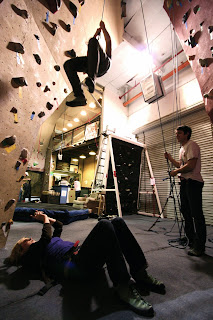 Thanks again for coming with us, Nicole and Jeff! It was so fun (and we would highly recommend it to others)!
Posted by kenny at 6:49 PM 6 comments:

Torn - but leaning toward the annoyed

I like that people use the coming of a new year to make resolutions to better themselves, I really do. I don't think it's something that should have to wait until a new year, but I understand and appreciate the tradition. However, there's one thing I do hate: the gym gets SO crowded during the first few weeks of January. I hate that one week I can hop on the treadmill as I enter the gym, and the next there's a line 10 people long - just because it happens to be January. My yoga class before Christmas had 10-15 people in it, this week it had 30-40. It's really frustrating when you've developed a habit and routine and it gets interrupted like this! Part of me is happy that it doesn't last very long, but I'm sad for all those who started out strong, but don't make it. I almost don't even want to go to the gym in January. Earlier this week Kenny and I tried to go, but gave up after 15 minutes and ended up jogging for two miles - in a parking structure. (Honestly it was actually pretty cool, but still...) I persevered, and made it three times this week, crowds and all! I deserve a treat...and I'm going to get one: Mammoth tomorrow! And they got eight feet of new snow this week! Happy riding!
Posted by kenny at 9:57 PM 3 comments:

It was one of those mornings where I couldn't focus. Too many things were on my mind and I was easily distracted at work. To cure the problem i started to write everything down to be able to clarify what exactly was bothering me. Not the best use of my time at work, but I wasn't getting anything else done, so I figured, "Why not?" Anyway, it worked! I identified the problem allowed myself a quick emotional moment in the corner of my cubicle...that sounds so pathetic!) and decided a piece of dark chocolate would cheer me up, so I went to search the women's offices for a piece (because the women in my office ALWAYS have crap like that at their desk.) I found some Dove chocolate - the kind that has a cheesy saying on the inside of the wrapper. Anyway, I opened it and read: "It's a bubble bath kind of day." After staring at it mid-bite, I just started laughing. AMEN; it was a bubble bath kind of day! So when I finish writing this that's what I'm going to do.
Posted by kenny at 9:33 PM 1 comment: