The following enlightening conversation between a cashier and a bagger was overheard at the grocery store last night.

Cashier: I’d like a pet armadillo
Bagger: I’d want a penguin.
Cashier: A penguin?! That’s ridiculous. That’s like wanting a pet moose. By the way, have you ever eaten moose? It’s tasty. My friend shot one and we all had moose burgers.
Bagger: Your friend shot a moose? Where was he, like, the Amazon?

If I dwelled on this much longer I might be really sad, so I’ll just leave it here at simply amused.

Another thing that might be really pathetic if dwelled upon, but is funny as a quick anecdote is the time last month when I fell on the train.

Let me set the stage for you. It’s 7:30ish am on a VERY rainy (i.e. monsoon) morning. I arrive at the train station and proceed to the ticket kiosk to purchase round trip fare to LA (where I had training that day). I’m not expecting my train for another 10-15 minutes. Again it’s pouring. The rain had apparently delayed the morning trains and as I’m approaching the ticket kiosk the earlier train arrives. Still needing to purchase my ticket, I still don’t expect to make this one. I buy my ticket and start walking over to the platform. The train is still there. I get closer. The train is still there. I’m three feet away and thinking, “I’m actually going to make this train!” when the doors start to close...instinctively, I leap my six-month pregnant self forward, shoving my open umbrella through the closing doors and barely, BARELY make it inside where I then lose my footing. My legs fly up, I twist sideways and come down hard on my right hip/butt cheek. In the nano-second that followed I (a) try not to pay heed to the train car full of gasping commuters, (b) struggle to make sure my skirt is still covering what it should, (c) jump up before the car attendant can reach me, and (d) retreat to the first empty seat available. Once seated, I try to gather my senses and decide that the injury to my pride is probably greater than the one to my hip. I then start laughing maniacally, further disturbing the morning commuters who are careful to avoid making eye contact with me.

When all was said and done, my umbrella was the only real casualty (besides my pride). Its handle was bent at a full 90 degree angle, which then snapped when I tried to straighten it. RIP, Umbrella. RIP, Pride.

Luckily, I live in Southern CA where one can normally function just fine without either of those things. 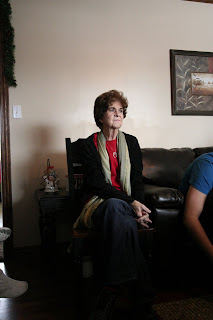 (Grandma Nielsen)
Today marks One Year since my Grandma Nielsen passed away from pancreatic cancer. Her's marked the first of quite a few deaths we experienced last year. It sucked. A lot. I hoped life would throw us a bone this year and excuse us from that experience this year...and so far, it has (thankfully). However, my Grandma Rollins just was released from the hospital without any diagnosis on her recurring problem.

Universe, please not again. Not this year. 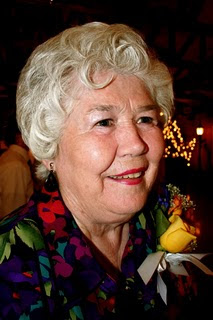 So today I ask that you call your grandparents (if you have them) and tell them you love them. If you can, please go see them. Hug them. Indulge them and allow them to repeat the same story you've heard so many times you can almost mouth the words along with them. And enjoy it.

And, to honor my Grandma Nielsen, I also ask that you all wear your seat belts while out and about and that you call someone to let them know you're home safely. It's what she would tell you if she were here.

I miss you, Grandma. Throw Grandpa a high five for us, and maybe say 'what's up' to our soon-to-arrive kid.

So it seems we're not very interesting lately. We're of course doing lots and having fun, but my brain has stopped functioning, making it impossible to string intelligent sentences together. I need something to write about - I'd accept assignments even. I like writing assignments...
If you're looking for something good, I suggest checking out Skyler and Elise's blog. They are almost always around when something fun/exciting/interesting happens. They don't wait around for us to make good stuff happen, they're doing good stuff all the time. I love them. You should, too. Make sure to read about their most recent physical feat: The O.C. Marathon. Don't be surprised if they become your fitness heroes. Elise is the reason I work out 98% of the time.
So, because I've got nothing else for you, here's some more prego photos. We've started taking them after church every week to document this last trimester. Rebekah, consider this next part dedicated to you.
(And I'll try to write something non-pregnancy/baby before next week's photo.)
29 Weeks: 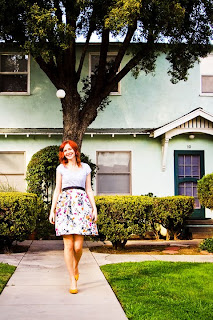 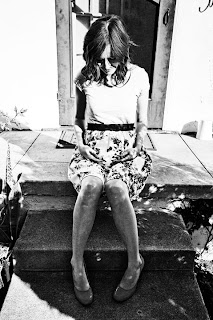 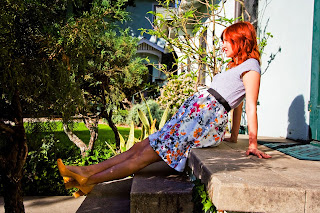 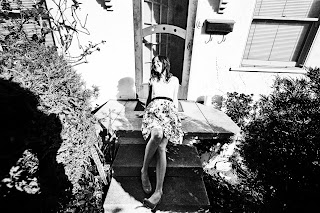 (Kenny says this next one is where I got annoyed at him. Can you see it?) 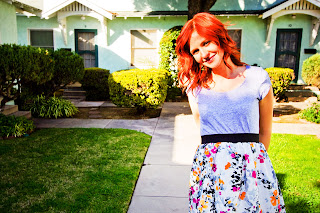 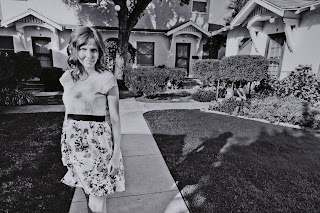 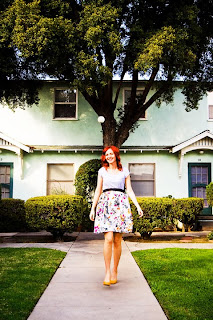 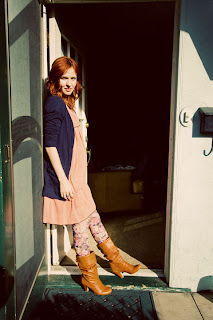 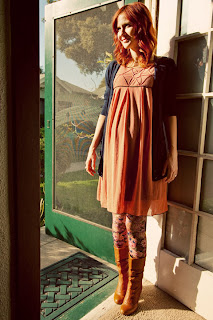 And one more, just for kicks...and because I have no shame. 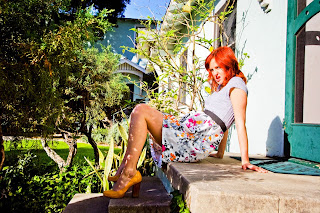 (I was showing Kenny exactly how I might look during labor. Thankfully my neighbors across the way didn't glance out their window. They would have had a great view right up my skirt. Now that might have been interesting. )
Posted by Jill at 9:49 PM 10 comments:

A photo tribute to myself. Or 28 weeks.

Last week we went to our favorite winter spot, Mammoth (with Skyler and Elise, of course). It was wonderful as always - even though it's really hard for me NOT being able to snowboard. Oh well, maybe I'll get some turns in Memorial Day if I'm lucky. The Kid would be six weeks old by then...plenty of time for me to get back in shape, right? ...RIGHT?!
Anyway, I have to give some love to the Subaru. I love it. The roads were snowy, but I could hardly tell. And it makes me really happy to see it in its element. 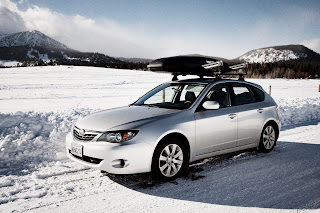 While the rest of the group snowboarded, I mainly drove around alone exploring all weekend. After picking Kenny up off the hill on Sunday, we remembered to take a few quick photos to offically mark our 28th Week - or the first day of the 3rd trimester. They're nothing special or formal (note the chipped nail polish and sloppy clothes/hair), but here you go. If nothing else these should prove that I am in fact pregnant. (Are you proud, Kenny? I actually said/wrote the words.) They're all side views because I still don't look distinctly pregnant from the front when I'm standing up straight - at least on camera. Here you go! 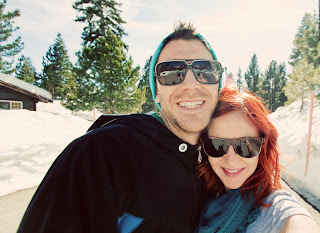 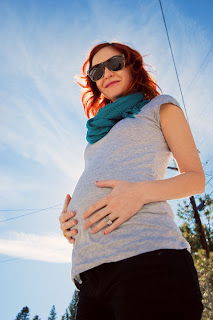 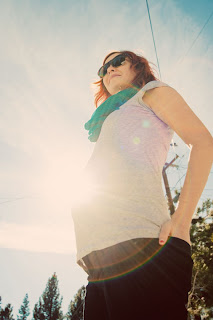 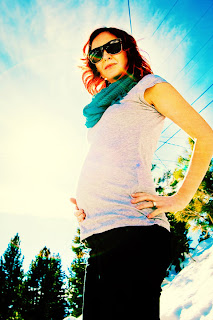 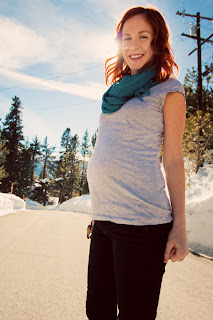 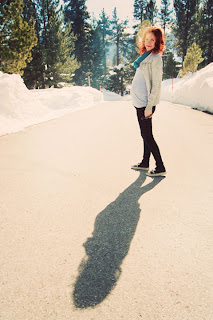 Taken Saturday, by me, of me. I was bored. 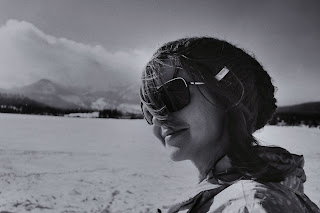 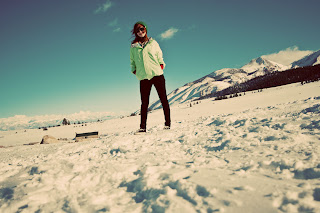