I may have mentioned that Kenny and I celebrated our seven year anniversary in June. Perhaps in direct retaliation to the rumored “7-Year Itch” I thought I’d finally take on his last name. You know, make it official or something. (*wink*)

No, truthfully being on maternity leave for four months finally presented the necessary time one needs to waste – I mean spend – in a government office to do this. Furthermore, with the baby…well, I thought it would be good if my name actually matched hers. (Also, it would have made for way less confusion at the hospital with visitors being denied because they didn’t know my legal, maiden name. But that’s another story.)

So I tried to change it.

I really did. Try being the operative word. However, my two-plus hours at the social security office bore little fruit in my effort and I’m sad to say that I remain Jill Nielsen (contrary to the still erroneous title of this blog). This is no longer due to a lack of effort; rather it’s because - this is a shocker - our government has concocted a procedure that makes it all but impossible for me to accomplish what should be an easy and routine thing. I know. It’s hard to believe.

On this particular day, the Social Security office wasn’t particularly crowded and the front office was adequately staffed. So that wasn’t the problem. Also, having spent my share of time in the DMV, I was prepared for a wait even with these seemingly favorable conditions. My baby was home sleeping, I was well fed and rested, and I had a good book with me. So the hour plus it took for a clerk to see me, while seemingly totally inefficient and unnecessary, wasn’t totally horrible.

No the real problem was that the procedure of changing one’s name (when one has been married for over two years), as explained to be by the geniuses our government likes to employ in these offices is essentially impossible. As the clerk explained it to me again (at my request, to make sure I was understanding), I grew increasingly dumbfounded. When she finished I just stared. “You realize that the procedure your explaining makes what I’m asking to do essentially impossible, right?” She smiled and cocked her head to the side and actually said these words, verbatim, “I know…it’s kind of a Catch 22.”

And there you have it people. Our government employee admitted that their own policy was inherently flawed. This admission is the only consolation I received from this ordeal. To be clear, let’s turn to the ever trusty Wikipedia to define Heller’s dreaded “Catch 22:”

“Among other things, Catch-22 is a general critique of bureaucratic operation and reasoning. Resulting from its specific use in the book [Catch 22, by Heller], the phrase "Catch-22" is common idiomatic usage meaning "a no-win situation" or "a double bind" of any type.”

The condensed version of the procedure is as follows: because I have been married over two years I have to first obtain identification bearing the name I plan to change my name to and then bring said identification into the SS office to legally change my name. I’m not mistaken. I had her explain it to me several times and I repeated it back to her. I even asked her if she realized that I can’t legally obtain an identification under a name by which I cannot legally call myself…that the social security office is where I am to obtain said name. She nodded and shrugged and again used the dreaded “catch 22” excuse.

And there you have it.

I’m exhausted just writing it, as I’m sure you are reading (for those of you who actually made this far). I'm sorry.

So you’ll now excuse me as I go pop some heavy dosage ibuprofen for the headache I developed in recounting this sad tale and take a nap under my desk.
Posted by Jill at 9:24 AM 11 comments:

I'm just hours away from completing my first week back at work. Full time.

I don't want to talk about it. But know that I did it.

To say I'm happy it's Friday and that I'm SO looking forward to the weekend would be the biggest understatement of my life.

On that note, Happy Friday and peace out.
Here's some cuteness to tide you over. 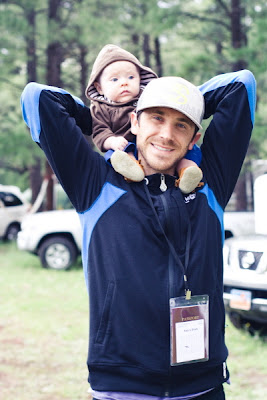 We took the girl to her four month check-up today and yet Kenny and I were the ones who got shots.

For the record, the girl has had a bit of a growth spurt since her last appointment. She went from being in the 50th percentile at two months old to the 75th percentile. That'a girl.

(p.s. - please get the adult booster for pertussis. Seriously.)
Posted by Jill at 3:58 PM 1 comment:

Look at this face.
Such attitude already. Next thing I know, she'll be rolling her eyes when she thinks I'm not looking. Or even when she knows I'm looking. (Not looking forward to that.) Fortunately most of the time we're getting this:
See?
Have a happy weekend.
(And for the record...attitude aside, I still love that first face.)
Posted by Jill at 10:32 PM 8 comments:

What a great weekend! Actually, what a great summer. The awesome-ness of it all can be summed up in the picture below wherein my dad, while visiting this weekend, gives my bike a "proper" ride. 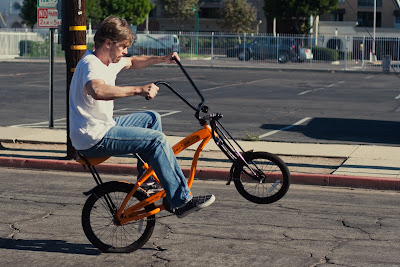 Once again, we're back after a longish vacation. I'm loving this whole maternity leave thing! This time, however, we were without any connection to civilization for about four days.
I loved it.
I know I'm in the minority, but I just LOVE when people can't check their phones every few seconds. The level of sincere attention one pays when he/she is disconnected from phones/internet/etc. is magic. Conversation flowed, fun times were had, nature was enjoyed, and meals went uninterrupted. Again, it was bliss.
And now we're home...and I find myself checking my blog-reader/email every few hours or so. I'm a hypocrite, I guess (except for the phone part - I'm still not glued to my phone).
And now I leave you as I delve into a few days of laundry and deep cleaning. Wish me luck!
(I'd say give me a call, but truly my phone is likely buried under a week's worth of camping laundry.)
Posted by Jill at 10:31 AM 1 comment: