To everyone who has congratulated us and has said such complementary thing about our girl…thanks. Seriously. I try not to gush too much over her (to others), so thanks for being so nice when I cave.

And to Diana (who asked) the bonnet in the photo below was made by my great-grandmother along with a matching sweater. However, she died before completing it, so my grandmother finished it and then made the matching blanket. My mom made the dress and bloomers. Not shown are some cute eyelet espadrilles gifted from Kenny's mom.

This was her blessing outfit. Thankfully we had these heirlooms to make the outfit special as there was no way Lola would have fit into my dress (given that I was one when I was blessed). I’ll admit, Lola Dee was four months when we finally got her blessed (although the photo below was taken just after she turned five months). We just wanted our families to be there and it took awhile. We got most of them, but missed those that weren’t able to make it. The blessing itself was sweet and intimate. Kenny did a good job. After much reflection, I’ll just say that it was sweet in its simplicity; it was focused and to-the-point while covering all the important stuff. I hope one day she’ll be able to say that same sentence about her life as a whole.

I hope to post some more photos of the actual blessing day whenever Kenny let’s me use our computer. (He’s been a very busy boy.)
Posted by Jill at 12:40 PM 3 comments:

Conversations with the Universe (continued)

When you make it up to a girl, you REALLY make it up!
I totally forgive you. 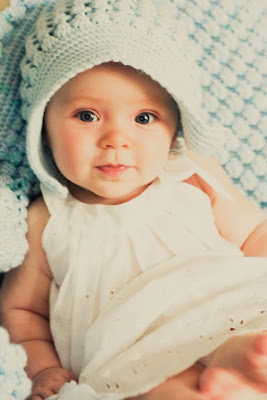 Please.
UPDATE: The Universe and I are no longer speaking.
Posted by Jill at 8:50 AM 3 comments:

Why I've earned a good weekend.

While I was on maternity leave my office went through some major renovations to create additional space for another team we were absorbing. What this ultimately meant for me was that my old cubicle (which was HUGE) was going to become two real offices and, more importantly, that I would get an office! With walls and a door! Yippee!

Except for one thing. All the offices here have floor to ceiling windows…and no blinds. This by itself isn’t a huge deal, but it became a concern when I realized I would be pumping in said office as there really is NO WHERE else to go (with an electrical outlet) that offers any more privacy. On my first day back I was in a temporary office (which unfortunately was the first office one sees upon entering our floor) and a few of the secretaries jimmy-rigged some wrapping paper over the window so I could carry on with some dignity. Did it look good? No way. But it did the trick. The huge windows facing the outside were another issue, but one about which I cared less.

Imagine my excitement when I noticed a new office converted from an old file room in the back, at the end of a hallway that lacked the window! It was referred to as “the cave” and was slated to just be an extra office for visitors. Well, I campaigned hard and got the office! (Okay, it wasn't hard. No one else wanted it. Actually everyone was surprised I would want it when I had a much more central office with my name on it.) Anyway, renovations were completed and we moved in last week. I’m loving this space. Windows into neighboring offices were placed way up high along the ceiling ensuring privacy but making it less cave-like than one might think. And it’s huge, but that doesn’t really matter. I have privacy!

Or so I thought.

Imagine if you will my shock and horror yesterday when, while pumping, someone knocks on my closed door. Before I can even answer a certain maintenance worker walks in smiling and proceeds to ask me about the lighting and ceiling tiles.

I, in the second I had to process that this was really happening, had all but dove under my desk and ripped the device off my lactating mammories. I groped around for the pump’s Off switch and tried to cover the girls up…all while he chatted away about ceiling tiles.

After he left I regained my composure and resumed pumping. I had just gotten into a good rhythm (if ya know what I mean) when I looked up to see his face through the window in the neighboring office. The window that stretches along just under the 14 foot ceiling? Yeah. He was in there on a ladder working on, you guessed it, ceiling tiles.

I gave up.
And then I went home.
I figured I had earned it.
And I’d much rather feed my baby myself anyway.

Boss: Hey! How's it going? Are you liking your new office?
(side note: I have a real office now, by the way. The kind with four walls and a door.)You're hard to find now. I can't just be walking by any more; I have to come all the way over here specifically to chat with you.

Me: The office is nice, but fess up. You were just walking by.

Boss: alright, you got me. I was looking for P. Anyway, you hangin' in there alright?

Me: Yeah…I guess. But as much as I like spending all day with you folks, my girl is still way cooler.

Boss: Yeah, well. I’m sure that’s true. Someday she’ll appreciate your efforts to have a career. Actually, my wife and I were talking about the moms with daughters in our neighborhood that have been stay-at-home moms. Their daughters just seem so unmotivated, you know? Their plan is to just marry a rich guy and never work.

Me (smirking): Um…you live in Newport. (Boss smirks back at me.) So that may have less to do with the fact that those moms stayed home and more with the mom herself. My guess is that trophy wives don’t always make for great mothers. But that’s just a thought.

Me: Thanks for trying.

A much deserved congratulations.

Congratulations to that girl in the center accepting her FIRST PLACE WIN for an entire summer of mountain bike races. 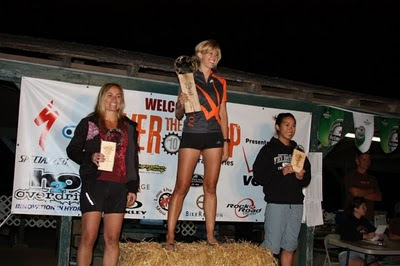 I'm sorta proud when my friends are awesome.
And Elise is awesome and then some.

If you can't get enough, you can read more about her here in the OC Register.
Posted by Jill at 11:55 AM 4 comments:

I hope you're still asleep, cuddled up with our baby. You were out l-a-t-e last night celebrating with your brother on one of his last nights of being unwed. I hope you had fun, but I really missed you. You know it's hard for me to sleep without you. So I waited. I waited much longer than I should have (considering the horrible hour I have to wake up) and I finally crashed sometime after midnight. I guessed I crashed hard. But you knew that.

So I'm sorry that I slept through your return. And I'm really sorry that you were locked out for 45 minutes because I had your keys and had locked up the house and would NOT wake up. I didn't believe you this morning when you said you really were out there for that long, ringing the door bell, calling me, and even yelling my name (which I'm sure our neighbors just loved). No, it wasn't until I noticed the six or so missed calls from you spanning an ungodly hour of the night that I realized just how deeply I must have slept.

Again, I'm sorry. Thank your for not resorting to banging on our window. You know that would have scared the you-know-what right out of me and ruined any plans I (and our daughter) had for a good night's rest. And I'm especially glad you finally broke in through the bathroom window and made it to bed. Because if I can't fall asleep with you I really like to wake up with you. Or at least next to you.