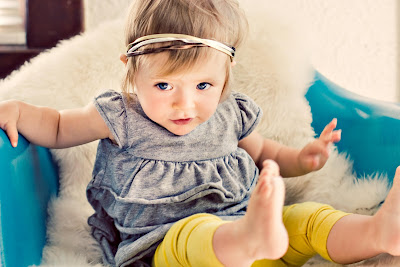 I may soon request writing assignments so that I have something to write about other than Lola. I actually think of quite a few topics during the day, but I have limited access to a computer during the day (think none actually) and so at day's end I'm too tired to remember or put in the effort. Oh well.
For Lola's party, our uber-talented cousin, Emily, made our girl a "Lil' Lola" doll ("Lil" for short around our house) in Lola's likeness. I just about died over it. SO CUTE. She even made gold lame leggings inspired by THIS shot (which made me super happy). Emily will be auctioning off a custom doll as part of the Team Davy Jean Benefit fundraiser and requested photos of Lola with her matching Lil' Lola to display at the event.
Lola wasn't very cooperative. It took three attempts (over three days) to get a decent shot. (And I use the term "decent" pretty loosely.) 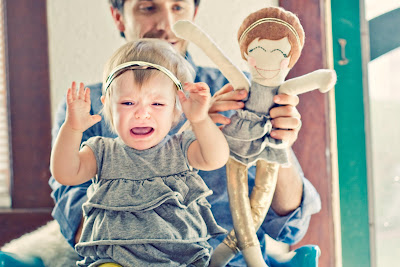 This is her preferred way of showcasing the doll. 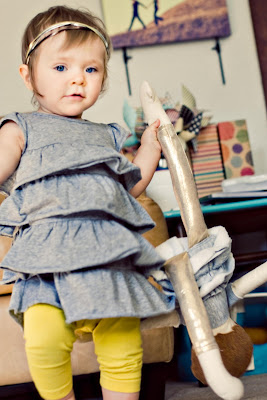 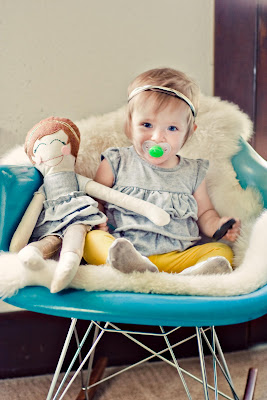 And then she was just slap happy. 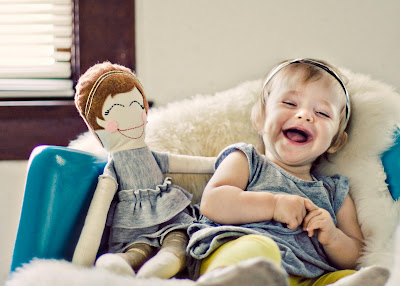 And finally tired and cuddly. 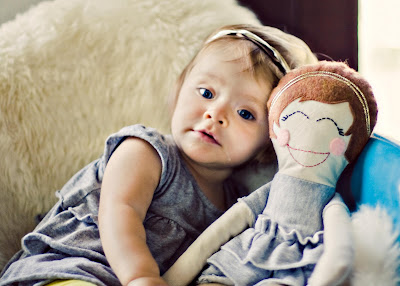 That's all I've got right now.
(Not true; I have lots of photos to edit and post, and not all are centered around Lola, but...I'm tired. And I'm serious about those writing assignments. Please!)
Posted by Jill at 8:05 PM 6 comments:

As of some point last week, Lola officially became a toddler. She's still doing the whole arms-over-her-head-monkey-walk; nonetheless, walking is now consistantly her go-to mode of getting around.
It's sort of adorable.
Personally, I'm still in the follow-her-around-everywhere-to-guard-that-cute-head-from-sharp-corners mode (which is a whole new kind of exhausting), but I love seeing that little body toddle around finding whole new places to explore. She's pretty proud of herself, too. Now I've got to work with her on some fine motor skills, specifically feeding herself with utensils. Once she nails that...oh, the freedom! I could actually feed myself! Huzzah! (But I'm getting ahead of myself.)
I spent last week in Utah, thanks to an invite from my cousin, Michelle, who conveniently had two extra seats in her car for the trip. That means it was Michelle and I with FIVE kids under the age of nine (two of whom were babies) for a 10 hour drive. Thankfully our Uncle put us up for a night in St. George to break up the trip, thus preserving our collective sanity. Actually, I must say that the kids were truly awesome. I was blown away. No real fights or melt-downs, or major fussing. Well, there was some, I guess, but hardly enough to even notice. And given that I hadn't really gotten to visit with Michelle in a long time, there was lots to talk about, which always helps the drive go faster. It was a great trip! Although I didn't have a car, I was able to see lots of friends and family, and Lola got round-the-clock attention from her aunts, uncle, and grandparents. She's a spoiled girl. We both are.
Kenny held down the fort and got lots of work done, although whenever we spoke, he was usually getting ready for some party or get-together "for work" he insisted. Hmmmm. Either way, I'm glad he had lots to keep him busy.
Yesterday marked two months since my last day of work. The second month went a lot faster than the first. I feel like I finally have a rhythm. I know what I need to do to feel balanced and accomplished at day's end and have finally found a good pace for this new life-style. I still miss my job occasionally, and I have yet to really come to terms with the loss of my income, but we're all doing pretty great. Insert huge sigh of relief.
Some things making me happy:
Some things making me not so happy:
Looking at the "bad" list, I must say it's pretty shallow on the whole. Which is great. No complaints here!
(Universe, do not take that as a sign to send me something awful. Just let me enjoy it for a bit...)
I'm a bit random right now...oh well.
Good night.
Posted by Jill at 8:16 PM 3 comments: 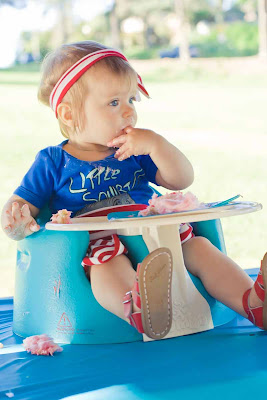 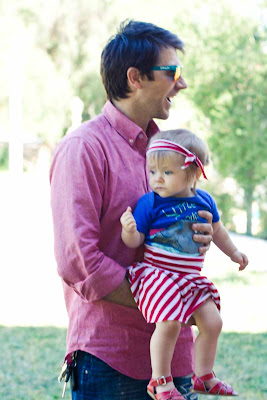 Note: this is a journal post. Lots of words, for record's sake, but not necessarily interesting.
My baby is one. How awesome is that?! We not only kept a totally helpless human alive for a whole year, but I think she's turned out to be the sweetest, funnest, cutest person ever. Pat on the back for me. And for Kenny. I'm not even going to qualify that statement with the standard "I might be biased - I am her mom" statement. I'm throwing that out there as objective fact. Ask me again when she's a teenager...
Anyway, her actually birthday was a rough one for me. I made the mistake of dropping her evening feeding just days before the big day so I was a bit hormonal. Add to that a certain monthly visit along with my baby taking her first unassisted steps...plus putting her hair in pigtails for the first time, which seemed to age her a decade. Short story: I cried over everything. All. Day. Long. She just seemed so old. Too quickly.
Those that know me should be proud. I did throw her a birthday party (granted it was a few days after her actual birthday). Hosting gatherings always sound fun, but the reality of it usually stresses me out enough that I never do it. However, mostly at Kenny's adamant insistence, I did throw the girl a bash - and it turned out pretty great. Once I toned down my ambition and super-simplified my plan to something actually do-able, I even had fun with it.
A Disclaimer: Amelia couldn't make it to the party (bummer), which means I was in charge of photos (along with everything else), which means I didn't get many photos and the ones I did get were sort of terrible. Most of the photos were taken at the end when everything had been thrashed. And I hardly got any of the guests. (Double bummer). And truthfully, the ones I did get were un-posed candid shots and were not flattering. Sorry. For the record, the party was cute and the guests were all beautiful. Moving on.
I did a loose Dr. Seuss theme. Lots of color, lots of stripes, and simple decor. Standard streamers, a banner with photos of Lola's first year, a few themed activities, and that was it. Some friends/family helped out with the food and a fun time was had.
We put out Seuss's "Happy Birthday to Me!" book and asked people to write a birthday message in it for Lola. (This was my favorite thing.) We had a bowl of Swedish fish for a "one fish, two fish, red fish, blue fish - guess the number of fish in the bowl" game. And finally we had "Sam-I-Am's Green Egg Hunt." The kids were asked to find four green eggs (filled with dr. Seuss stickers or peppermints) and return for the rest of their goody bags: Seuss pencils, book marks, and gold fish. Simple, cute, and fun.
Lola had a ton of friends show up. I cried later; we are so fortunate to have such great support and love from so many. And the gifts - wow. I debated asking that people not bring gifts (we have no room and Lola really doesn't need any), but Kenny wanted our girl spoiled at least once. And spoiled she was. She got some great stuff! I was really excited. Thanks everyone!
Anyway, here's the photos: 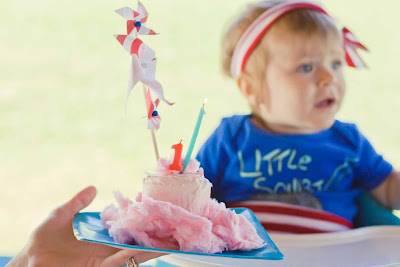 Rather than do a full cake, we did cupcakes - specifically red cupcakes with blue cotton candy on top (to look like Thing One and Thing Two). Lola got the leftover pink cotton candy making her whole cake look like a sugar cloud. Not that she was disappointed. Here she is trying to figure out why 40 people are gathered around staring at her. 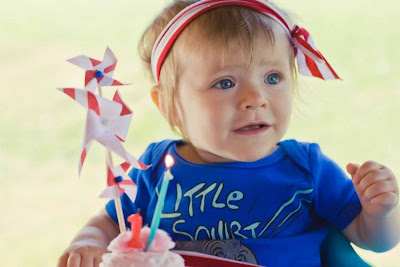 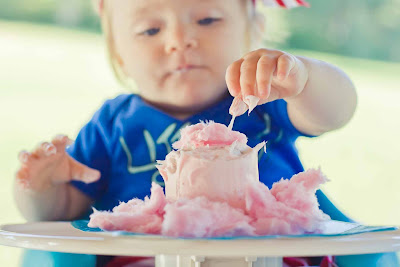 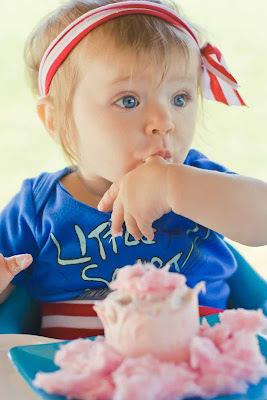 I look as haggard as I felt at this point, but my baby's cute and my husband is handsome. Right? 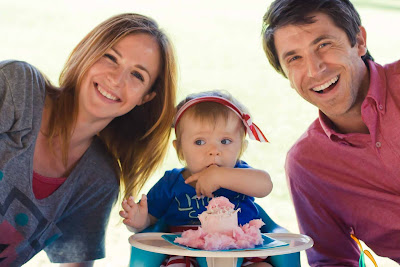 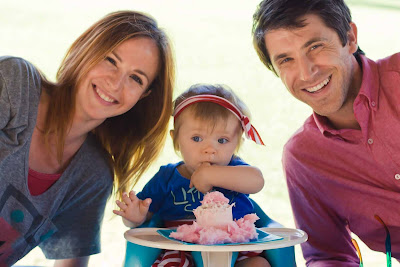 Notice how unfazed Sweet Dee is that her dad is being goofy. She's focused on that cake. 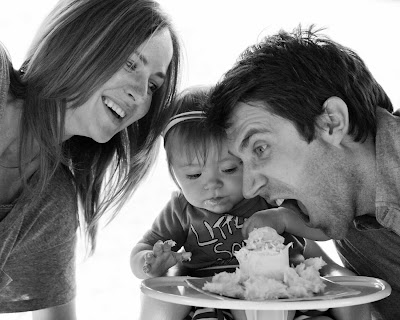 Anna was super fascinated that Lola was getting cake "all over her face!!!!" (She was sure to tell me. Repeatedly. It was cute.) 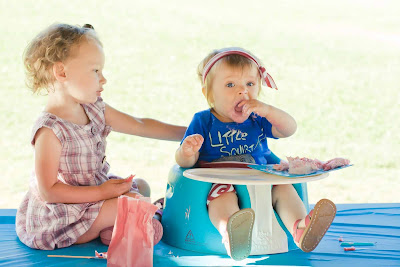 Truth be told, she didn't get all that messy. It was sorta boring. For once, she was dainty about feeding herself. Of course.
Diego won the guessing game. There were 272 Swedish Fish in that bowl (at least there were when the party started); he guessed 270. Congrats Diego! (I know your mom was super stoked to get all this sugar!) 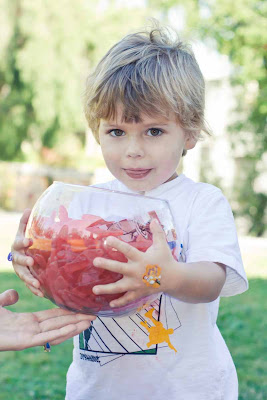 I don't think he really believed me that they were all his. 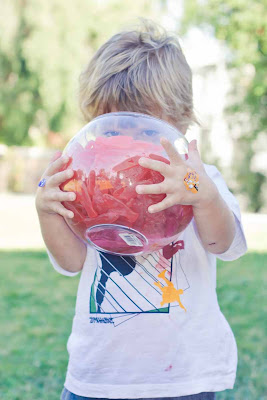 You can see Lola toddling around in the far right... 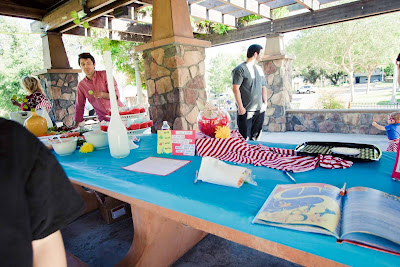 Chase De Gala signing Lola's Birthday book. (I may break this book out every year and add a new birthday wish. I loved reading what everyone had to say.) 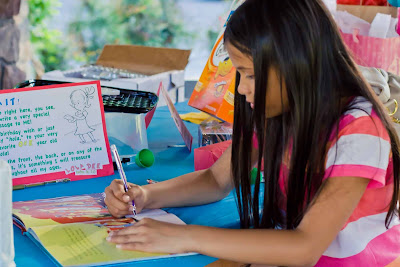 A few of the kiddos. Thank goodness for having the party at a playground. 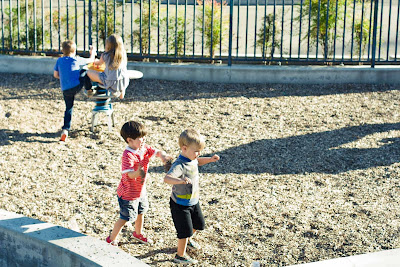 Again, the decor was simple. Although Amelia and I had quite the time getting it all set up - we're both sorta short and we didn't have a ladder. There were some cheer-worthy acrobatics going on! (Extra impressive given Amelia's pregnant!) 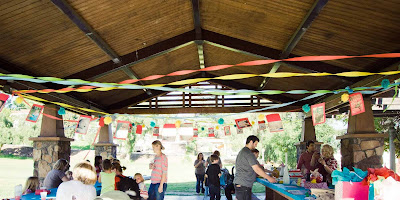 Some of the guests...again I only got maybe 1/20th of those that came and I'm only posting the photos that weren't too bad. I probably should have warned people I was taking their picture...
The Ball's, Martinez's, Adlong's, Hudd, Rich, Bryce, Pickle, Lucy... 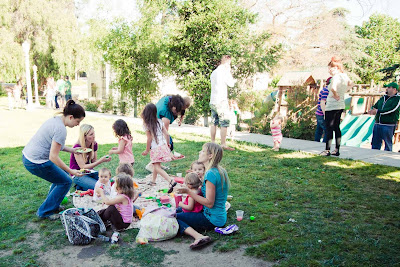 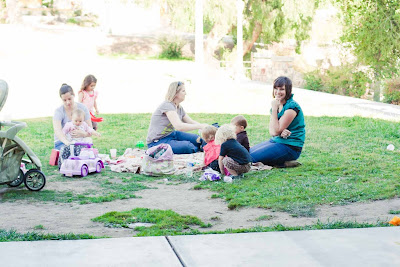 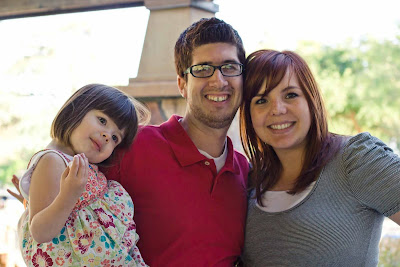 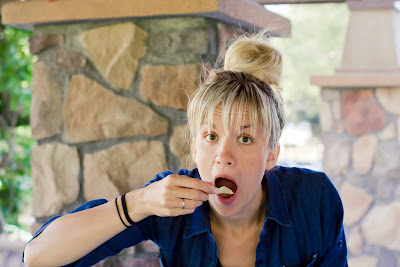 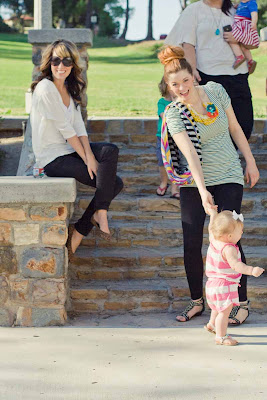 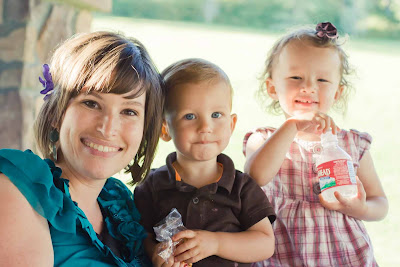 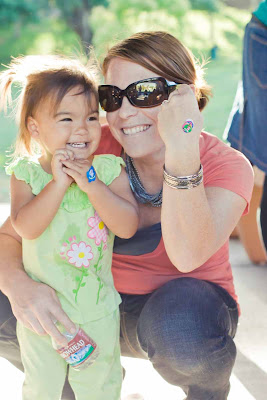 At one point someone said to me: "So is it awesome to have such an attractive group of friends?" I looked around...I do have pretty friends. All of them. And, yes, it is awesome.

Happy Birthday, Lola! You make your parents ridiculously happy. We can't wait to see what this next year holds, but don't rush it; one came quickly enough!
Posted by Jill at 8:55 PM 7 comments: