(Again taken with the Kaiser's Smilebooth.)

I was going through some of the photo folders on Kenny's desk top and came across these from a few years ago...back when a certain little sister still believed in a certain man from the North Pole. 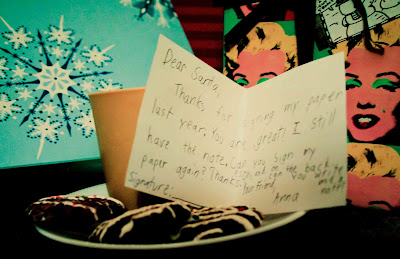 Translation:
"Dear Santa,
Thanks for signing my paper last year. You are great! I still have the note. Can you sign my paper again? Thanks. Your friend, Anna.
Signature: ___________________
PS. and on the back can you write me a note?"
Notice that she reference Santa signing a note the prior year. I recall that note saying something to the tune of "Dear Santa, I believe in you, but my family doesn't. Will you please sign this note so I can prove to them that you're real?"
I love this. I can't wait for Lola Dee to pull stunts like this.
Here's the note "Santa" wrote on the back. 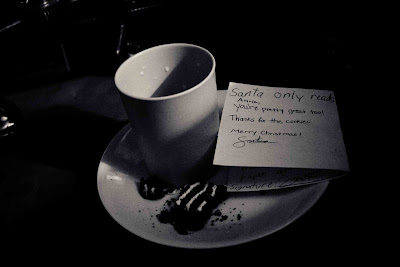 I should note here that we didn't remember which Santa signed the note that first year. Unfortunately we guessed wrong and a different Santa signed the second time. Needless to say, Anna no longer believes in Santa.
Moral of the story: kids are smart. Gullible, but still smart.
Posted by kenny at 4:35 PM 3 comments:

I've been just on the verge of slipping under the weather for the past week. I have yet to cross over into the full blown sick category, but the threat has been quietly making a quiet and persistent presense in that one spot of my throat reserved for illness.


It could be that my schedule - in addition to work, mothering, and church - has been PACKED full of stuff to do. Not shopping, mind you - I finished that up the first week of December (thanks to some epic determination and planning on my part). No, from Dec. 3 to Dec. 22 my calendar shows 21 (literally) holiday/birthday/baby shower events to attend. I have six left. (And in those six days I'll be making three significant drives, although Kenny will be the one doing the actual driving; I'll be sipping lemonade, popping cough drops, and trying to sleep in the front seat for those trips.)


I fantasize sometimes about simplifying, but our families are too big, we're actively involved with our congregation, and we have a lot of friends. I can't complain. Plus, a simple December would entail holing up in some frozen tundra miles away from civilization. Just not realistic. So, while things are crazy, we're pretty fortunate. Plus, when the parties turn into to this... 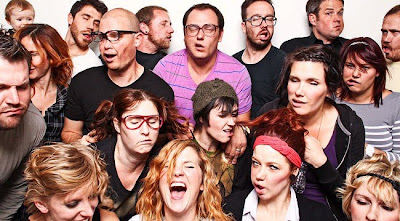 ...there's no room for whining.


(Notice my sweet girl's round head in the top left (behind her mother's big head). I haven't wanted to leave her with a sitter every night (especially because I work and that's the only time I get to see her). So she's tagged along to most of the events. And she's been a trooper. A little party-animal-in-training.

Oh yeah, the image above was taken with the ever-awesome Smilebooth thanks to the Kaisers of The Image is Found Photography. Love those guys.

The milestones are bittersweet

Once upon a time we had this baby who barely opened her eyes for more than a few minutes. And then, all of a sudden, she started staying awke. Then came cooing and smiling and giggling. There was also the rolling and sitting. Currently we’re waiting (with some degree of dread) for unintentional scoots to become full blown crawling.

When The Girl reaches each of these milestones we can’t help but feel some sadness as we reel from Time rushing by. The baby we brought home yesterday is practically a teenager today. Or so it seems. With each milestone comes some more independence and with it, a reminder that she’ll one day be gone .

And, for the most part, that’s okay.

Really. It is. I’m okay with the thought. I’m okay even with the reality of it all. I just wish sometimes it didn’t happen so fast. Or that I could rewind every so often just to remember. So while I cheer and clap over every little development (i.e. “did you see that Kenny?! She picked it up with her fingers intead of her whole fist! Etc.) I always endure melancholy moment with each new accomplishment and skill.

Today, amidst her normal all-vowel babbling, The Girl said “mama.” It was awesome. For a long time I've gleefully watched her intently (but silently) move her mouth in imitation of my own as I've said that very word to her. Over and over again. Her finally saying it came with less sadness as other milestones. I think it’s because this one doesn’t remind me of her leaving someday (the way rolling and crawling does – not to even speak of walking, because when I think about her walking I can’t help be think of here driving, and suddenly I’m handing her the car keys and then she’s away at college and finally married with kids of her own – AHHHH!) . No, her learning to communicate is exhilarating. It will enable our relationship to grow closer. Even when she’s gone we can chat. And the fact that her first deliberate consonant-vowel combo was mama just melts. my. heart. Of all the things she could have said, she said Mama. Thank you Universe for that. Even when she’s gone, I’ll still be Mama.

(And yes, I know that she doesn’t get the meaning of the sounds she’s making. I know. I even know that someday I may occasionally long for the silence of those pre-verbal days. But I don’t care. She said mama. I love it.)